update January 5, 2013 : I finally managed to scan the drawings so I've changed them to proper scans instead of the previous photos.

in a way that's becoming far too common I have recently been working a bit too much to actually manage to write anything, but here's a post I started ages ago and have finally finished: 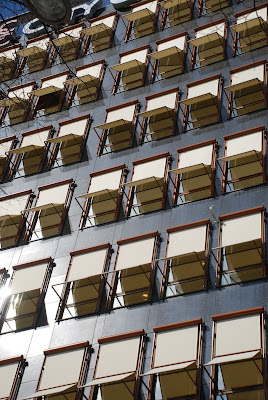 in the social-democratic heartland of Stockholm, on the northern side of Norra Bantorget, there stands a slick 1950's office building: a shiny black labradorite wall with hardwood windows – mid-century modernism at its most corporate. but looks deceive, the most extraordinary things are hidden behind that façade: a jumble of caves, stairs, bridges, cantilevering ledges and raking floors; it's a veritable Piranesian etching – well, as seen through a high-modernist prism, of course.

when viewed from outside there's really only one thing that's hinting at something unusual being found inside: at first-floor level a huge concrete canopy decorated by abstract sculptures extends out over the pavement. that canopy makes for a surprising addition to an office building.

in a way the building's sober façade could be read as an example of Adolf Loos' theories of masks. or rather it could if only the sober modernism had stopped at the front door to be replaced with something more thrilling and over the top inside, but this just isn't that kind of a building. what it is, though, is a building of much greater complexity than you might expect when first seeing it from afar, and that complexity is best illustrated by taking a look at the section: 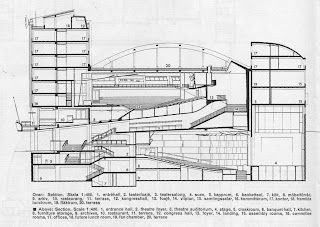 behind that office building there lies two huge voids, one on top of the other. in a way the building is almost like something from OMA's late eighties: generic façades and heroically scaled construction used to create vast spaces where no-one would at first expect them. 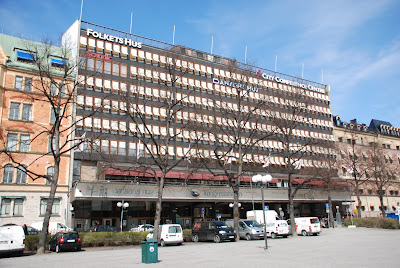 this is Folkets hus (1951-60) in Stockholm by Sven Markelius (1889-1972), professor of city planning at KTH and one of the architects on the board for the UN complex in New York. Markelius has been largely ignored for the last while, eclipsed by his contemporaries Gunnar Asplund and Sigurd Lewerentz. he was a friend of both Asplund's and Alvar Aalto's (whom he introduced to CIAM) and was one of the major Swedish architects during his life, not least because of his role as planning director in Stockholm. internationally he's probably best known for his own house, used as illustration of the AR-article 'The New Empiricism'. Markelius had lots of connections in the Social Democratic Party – for example he designed the house of Gunnar and Alva Myrdal – and I assume that is how he ended up with the commission for Folkets hus. I'd like to see Folkets Hus as his greatest building, it's at least his most odd and weird one.

when the association running Folkets hus decided to demolish its 1901 building and replace it with a bigger it tried to buy up as much of the surrounding land as possible. despite this the plot ended up at only 4 250 Sqm. because of the relatively small plot the two main spaces of the program – a 750-seat theatre and a 1 500-seat congress hall – had to be stacked on top of each other in the middle of the plot with offices making up the two blocks lining the surrounding streets. well, that isn't entirely true as part of the building along Wallingatan (at the northern side of the plot) is taken up by the fly-tower of the theatre - something which obviously renders an active relationship between the building and the street quite tricky. on the other hand the street frontage towards Barnhusgatan makes up for it somewhat as it houses the main entrance for the theatre and the conference hall and a separate entrance for the first-floor restaurant as well as two entrances for the offices on the floors above. 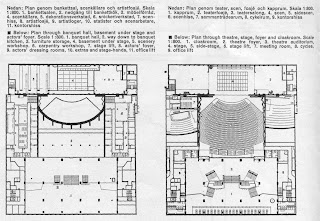 it seems now might be the time to talk about those two voids – or caves as I called them in the beginning – the theatre and the conference hall. it's actually only the theatre that merits to be called cave-like: hidden away deep in both plan and section and with zigzagging walls of red brick there is something very earthbound about the space. the white walls and black ceiling studded with round lights of the conference hall on the other hand is reminiscent of an outdoor space in the city a star studded night, in that way related to the auditorium in Asplund's Skandia cinema from 1923. both the theatre and the conference hall play up the theatricality but aim for different associations: the dark cave with the opening through which you observe the world and the agora - the birthplace of democracy. 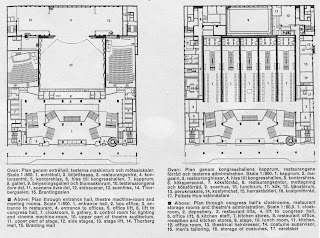 connecting and flowing between these two spaces are two lobbies. the entrance lobby is the logistical heart of the building: straight ahead a gap gives a view of the theatre's foyer half a storey below while the rising ceiling hints at the route up to the conference hall. the stairs to reach these other rooms are situated at either side of the gap.* if you ascend the stairs you reach the corridor-like cloakrooms for the conference hall. sandwiched between the theatre and the conference hall the walls separating these cloakrooms double up as beams of immense dimensions making sure no columns are needed in either room. 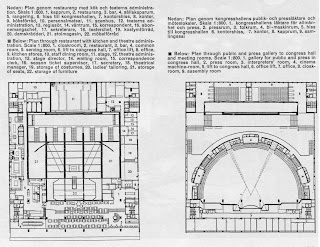 the foyer for the conference hall is a wide and bright space lit from a south-facing roof-light along the back wall. having arrived here, looking at the interior wall of the theatre's fly-tower, the visitor is encouraged to make two ninety-degrees turns and end up facing the curving back wall of the conference hall. this foyer has some elements in common with the entrance foyer: the gap, a ledge-like balcony and the symmetry. the two rooms are clearly related and are key to making the building function in such an easy way as it does. 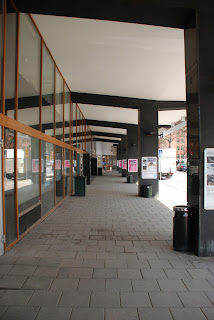 I began by claiming that Folkets hus was akin to but not quite adhering to the theories of Adolf Loos. while writing this post I've had to revise that opinion, it's entirely like a larger version of a Loos villa. all the elements are there: the elaborate section, the symmetry of all major rooms, the interior decoration meant to create different moods in different rooms, the meandering and staged communication  – even the tucked away communication for staff/workers.

I've liked Folkets hus ever since I first visited it during first year in college but for different reasons. what most attracts me at the moment is that it's such a complex building but that that complexity is not based on knowing references to historical precedents nor is it an over-complicated skin stretched over a banal stacking of identical floors, no it is a building with a simple and unassuming language used to render the actual complexity of the building as easy and intuitive as possible. it's a very confident building and it's basically the antithesis of almost anything that is being built in present-day Sweden, and for that reason alone well worth remembering and celebrating.

* this set up could be seen as an evolution of the gap in the procession in Markelius' first modernist public building – the Helsingborg Concert Hall – where visitors encounter a half-storey change of level that forces them to make a ninety degree turn up some stairs into the coat rooms before getting back to the main corridor to continue towards the hall (see the cut-away model here). though in this case, as there are two main halls, the continuous ceiling and the falling away floor leads to one hall each.

acknowledgements:
all drawings are taken from the magazine Arkitektur no. 6 -1961.
Upplagd av p kl. 14:33